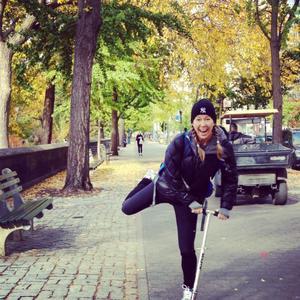 Yesterday I spectated the ING NYC Marathon in a serious way for the first time. It was a whole adventure that led me to many stories of inspiration. So many of my fellow spectators had their eyes on the Men and Women Elite runners who run the marathon at lightning speeds with winners Geoffrey Mutai, and Priscah Jeptoo crossing the line in under 2 1/2 hours. Watching them literally sprint through the course is a truly awesome example of physiological superiority. But I got lucky and accidentally came across a group of athletes who were as, if not more, spectacular. On my way to mile 18 on 1st avenue, I scootered with my 14 year old daughter across the top of Central Park from the West Side. As we got to 5th avenue, there were no crowds, but the street was blocked off and we started to hear the sirens. Of course, thinking it was the Elite women, we excitedly peered up 5th avenue expecting runners. Instead we saw the para-athletes speeding towards us. In an flash, they sped by propelled only by their hands and arms, heads down, intensely focused for the hill ahead. These athletes had just completed TWENTY THREE miles propelled by JUST their arms. At mile 24 we saw a blind female runner holding a tether attached to her guide. The bar for AWESOME raised to a whole other level! 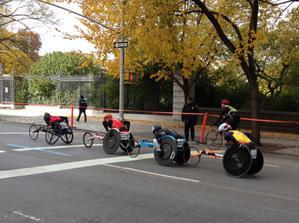 Seeing the capacity of human determination yesterday was so inspiring. What in these elite athletes made them able to rise above what to most of us would be an insurmountable disability to surpass the abilities of most non disabled people? It just reinforced my mantra that we really have NO EXCUSE not to reach for our goals. How big is our individual capacity to overcome the obstacles that we encounter? CLEARLY it is ENORMOUS. How many of us would be able to rise above a seemingly insurmountable challenge like losing our ability to walk or see, much less soar through the streets of NYC for 26.2 miles? I think we ALL have it, we just have to stop standing in front of ourselves and blocking the way with excuses, fears and insecurities. If you want something, you will find a way. I BELIEVE IT. It might be really difficult, and you might fail the first time or the first 100 times. But the truth is, that we have nothing to lose and everything to gain in taking on something that is seemingly beyond our capacity. Think it, Believe it, and it WILL happen. 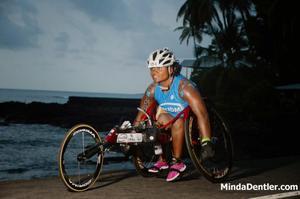 The photo above is of Minda Dentler. As an infant in India, she contracted Polio which left her paralyzed. Relegated to cheering on family members from the sidelines, in one local race she saw some para-athletes competing. Instead of saying “I can’t”, she dreamed “could I?’. All she could think of was the possibility, not the impossibility even though she had no idea how it would be possible. Fortunately, a friend introduced her to Achilles International a wonderful organization which encourages people with disabilities to participate in sports. With their help, she learned how to handcycle and participated in her first marathon in NYC in 2006. Since then she has participated in 10 marathons in 5 years.

Looking for her next challenge, she discovered triathlons while watching a few of her disabled friends compete in the NYC Triathlon in 2007. By early 2008, she not only signed up for the NYC Triathlon, but also took swimming classes at Asphalt Green and learned how to push a racing wheelchair. It took over 4 hours and 30 minutes to finish her first Olympic triathlon, but she was hooked. She has subsequently completed 14 Sprint and Olympic distance triathlons, 7 Half-Ironman distance triathlons and 2 Ironman distance triathlons. She has also placed in the USA Paratriathlon National Championships from 2008-2011 and was a member of the 2010 USA Paratriathlon National Team. On October 12, 2013 she entered the history books by being the first official female handcyclist to complete the Ironman World Championship in Kona Hawaii. She swam 2.4 miles, handcycled 112 miles, and pushed a racing wheelchair 26.2 miles. And she did it in just over 14 hours 39 minutes. AMAZING! She just shows us that we ALL can dream and that we ALL have what it takes to get us there.

NO EXCUSES! BE INSPIRED! PUSH FORWARD AND MEET YOUR GOALS HEAD ON! LIVE YOUR DREAM! NOW!

PRP and Microneedling: How it’s Become the Go-To Solution for Rejuvenating Aging Skin

Mar 03, 2022
Microneedling with platelet-rich plasma (PRP) treatments is quickly becoming the go-to solution for those who want to avoid going under the knife. Read on to find out how you can reduce the signs of aging with microneedling and PRP.
CONTINUE READING

Feb 01, 2022
If you want a mental or physical boost or get rid of a hangover fast, IV therapy can help. Learn about five great benefits of this popular treatment and try it out for yourself.
CONTINUE READING

Give Your Face a Fresh Look This Year with Laser Treatments

Can Carboxytherapy Get Rid of My Cellulite?

Dec 20, 2021
Ups and downs in life are inevitable, but lumps and bumps on your hips, thighs, and backside don’t have to be. Explore how a simple injection can smooth out your skin.
CONTINUE READING

Should I Get Botox or Fillers or Both?

Nov 15, 2021
Your entire body changes as you age, including your skin. If you’re unhappy with what you see in the mirror, you have options.Botox is right for some, others prefer the result from fillers, and some people do best with both.
CONTINUE READING

Oct 12, 2021
Get the beautiful, even-toned skin you’ve been looking for with a photofacial, an FDA-approved procedure that can treat sun spots, fine lines, and rosacea. Read on to discover some of its many benefits.
CONTINUE READING

Telehealth: The Advantages of Telemedicine

Sep 30, 2021
Struggles to get to the clinic? Trying to reduce your exposure to COVID-19, as well as other contagious illnesses, and still need to see your doctor? Telehealth is safe and easy — receive quality care from anywhere.
CONTINUE READING

Laser Hair Removal: You'll Wonder Why You Waited So Long

Sep 21, 2021
Trade in your old-school razor and painful wax for the latest laser hair removal technology. Laser hair removal is safer, more comfortable, and longer-lasting. Read on to find out what you’ve been missing.
CONTINUE READING

Microneedling With PRP: The All-Natural, Surgery-Free Way to Take Years Off Your Face

Aug 18, 2021
Fighting the signs of aging doesn’t have to mean going under the knife. You can can excellent results with microneedling and PRP, minimally invasive treatments that requires little downtime.
CONTINUE READING

Jul 20, 2021
Wrinkled, sagging skin sends a message of tiredness and aging. Boosting your look with our skin-tightening treatments is a great way to build back your self-esteem and look as good as you feel.
CONTINUE READING

Jun 30, 2021
That sleek silhouette is just the start of the amazing benefits of body contouring. This popular new wellness option is getting more and more attention as it gives many of us the body we want.
CONTINUE READING

Boost Your Confidence With BOTOX®

May 01, 2021
Botox remains one of the most popular cosmetic injections because it works. Not only does Botox reduce unwanted dynamic wrinkles, but it also restores your confidence. Read on to learn more about Botox and what it can do for you.
CONTINUE READING

Nov 04, 2020
Yesterday I spectated the ING NYC Marathon in a serious way for the first time. It was a whole adventure that led me to many stories of inspiration.
CONTINUE READING

All About Aging: What You Should Know

Nov 01, 2020
It’s no big secret that you’re getting older. It happens to everyone!
CONTINUE READING

Add A Lot Of Nutritional Bang With My 6 Favorite Mix-ins!

Oct 27, 2020
While most of the country is counting calories, I try to encourage my clients to look at the quality of what they are eating first. The reason is simple, and logical, yet we still feel the need to eat less and less to lose weight.
CONTINUE READING

Why Do I Get So Hungry Before And During My Period?

Oct 12, 2020
Cravings, bloating and then the hunger – the best diets are often laid asunder by your period. For many women, the symptoms leading up to and during the week of your period are outrageous, and one of these is the hunger...
CONTINUE READING

Why Are Soups So Nutritious?

Oct 01, 2020
When I started doing long distance endurance hiking, I had to come up with food that was efficient to carry. So it needed to be high in nutrition, and low in weight, yet able to satisfy my 6’2″ husband and week long trips of 100 miles...
CONTINUE READING

Its Easier To Maintain Fitness Than To Rebuild It.

Sep 26, 2020
How many times have we looked at celebrities well into their 50’s and 60’s and “wow’d” at how healthy and youthful they look. I’m not talking about having a face that looks 22, I’m talking about a lean, trim physique and a glow to the face...
CONTINUE READING

On The Edge Of Creation – Leaning Beyond Your Fear

Aug 07, 2020
So I just got back after a whirlwind 2 day working trip to Los Angeles where I was asked to give my testimonial for a new anti-aging product. While I have been asked many times over the last 14 years to endorse technologies and cosmetic products...
CONTINUE READING

4 Reasons Why Hiking Is Great For Stress Relief

Jul 21, 2020
HIKING FOR STRESS REDUCTION I am fresh back from hiking 115 miles of the Appalachian Trail in Pennsylvania.
CONTINUE READING

Feb 01, 2020
We have all been told at some point that proper hydration requires us to consume eight glasses of water a day. That works out to about two liters, which is an awful lot of fluid, considering the average human stomach (when unexpanded) is about the size...
CONTINUE READING