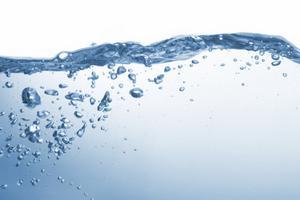 We have all been told at some point that proper hydration requires us to consume eight glasses of water a day. That works out to about two liters, which is an awful lot of fluid, considering the average human stomach (when unexpanded) is about the size of a balled fist.

But health researchers have refuted the eight-glasses-a-day claim as a silly myth riding a wave of flimsy scientific literature. In fact, many of the groups behind the public push for over-hydration have been exposed as having — surprise! — monetary interests in the fluid industry.

For example: In a 2011 article published in the British Medical Journal, Margaret McCartney debunked the eight glasses a day myth and noted that one water advocacy group in Europe, Hydration for Health, is not only sponsored by, but was actually created by food giant Danone. Under the company’s expansive culinary umbrella? Volvic, Evian, and Badoit bottled waters.

Set aside the entangled interests of Big Bottled Water, and you’ll see that study after study continues to show that the human body is remarkably resilient when it comes to quenching our thirst. Saharan nomads, for example, are capable of subsisting on very little water for days at a time in one of Earth’s most hellish climates, as was first noted in 1976 by anthropologist Claude Paque.

You and I, on the other hand, may get a bit cranky in our air-conditioned offices if we forget to visit the water cooler for a morning, but it’s highly, highly, highly improbable that we’d shrivel and die at the dusty hands of the dehydration monster. Consider all the other stuff we consume. Despite the widely held notion that tea and coffee dehydrate us, they actually count toward our overall water intake, says Dr. Stanley Goldfarb, a nephrologist (kidney researcher) at the University of Pennsylvania. Even though we’re told it’s important to drink eight glasses of water a day, “there’s no evidence that benefits health in any real way and it really represents an urban myth,” says Goldfarb. Even something like, say, a baked potato, is 75 percent water.

So where exactly did this eight glasses of water a day voodoo come from? The very idea of a “minimal water requirement” is actually a fairly recent notion that first appeared in dietary guidelines published in 1945 by the Food and Nutrition Board of the National Academy of Sciences. The academy spuriously suggested that “2,500 mL [2.5 liter] of fluid should be ingested on a daily basis,” although a primary clinical study was never actually cited.

The idea may have been at least partly put forth by Frederick J. Stare, an influential 20th century nutritionist and founding chairman of the department of nutrition at the Harvard School of Public Health. (He passed away in 2002 at age 91.) Stare was one of the first to recommend that humans consume six or so 12-ounce glasses of water a day.

Since then, researchers have begun to see eight glasses a day as an overestimate (especially considering our diets), but there are still advocates pushing for eight glasses of pure water or more. Those proponents include Dr. Fereydoon Batmanghelidi, a medical practitioner in Virginia who claims that a lack of water is responsible for many preventable diseases. Water, after all, is still good for us. Recent studies have suggested that adequate hydration may not only give our cognition a boost, but goes a long way toward keeping chronic kidney disease at bay.

As for how much we should be drinking, there is unfortunately no hard and fast rule. (Sorry!) And when you include all the other stuff we munch on or guzzle throughout the day, we actually consume more than the recommended two liters. A 1995 Australian survey found that the diet of average adults provides more than enough daily fluid: Women take in about 2.8 liters a day, and men consume 3.4 liters a day.

Research suggests that drinking water when you start to feel thirsty is sufficient should you desire to continue existing. Clearly, it’s all relative, as when you feel thirsty will be different if you’re drenching yourself in spin class or spinning in your cushy chair at work. As with most things, it’s probably best to listen to your body before proceeding accordingly.

Some classic signs of dehydration include skin tenting (where you pull up your skin and it is slow to snap back), light headedness when rising, rapid heartbeat, headaches, thirst and mental confusion. I always know that I am well hydrated when I urinate once an hour and the urine is nearly clear. Sometimes following the signs are better than just plugging in an arbitrary number.

PRP and Microneedling: How it’s Become the Go-To Solution for Rejuvenating Aging Skin

Mar 03, 2022
Microneedling with platelet-rich plasma (PRP) treatments is quickly becoming the go-to solution for those who want to avoid going under the knife. Read on to find out how you can reduce the signs of aging with microneedling and PRP.
CONTINUE READING

Feb 01, 2022
If you want a mental or physical boost or get rid of a hangover fast, IV therapy can help. Learn about five great benefits of this popular treatment and try it out for yourself.
CONTINUE READING

Give Your Face a Fresh Look This Year with Laser Treatments

Can Carboxytherapy Get Rid of My Cellulite?

Dec 20, 2021
Ups and downs in life are inevitable, but lumps and bumps on your hips, thighs, and backside don’t have to be. Explore how a simple injection can smooth out your skin.
CONTINUE READING

Should I Get Botox or Fillers or Both?

Nov 15, 2021
Your entire body changes as you age, including your skin. If you’re unhappy with what you see in the mirror, you have options.Botox is right for some, others prefer the result from fillers, and some people do best with both.
CONTINUE READING

Oct 12, 2021
Get the beautiful, even-toned skin you’ve been looking for with a photofacial, an FDA-approved procedure that can treat sun spots, fine lines, and rosacea. Read on to discover some of its many benefits.
CONTINUE READING

Telehealth: The Advantages of Telemedicine

Sep 30, 2021
Struggles to get to the clinic? Trying to reduce your exposure to COVID-19, as well as other contagious illnesses, and still need to see your doctor? Telehealth is safe and easy — receive quality care from anywhere.
CONTINUE READING

Laser Hair Removal: You'll Wonder Why You Waited So Long

Sep 21, 2021
Trade in your old-school razor and painful wax for the latest laser hair removal technology. Laser hair removal is safer, more comfortable, and longer-lasting. Read on to find out what you’ve been missing.
CONTINUE READING

Microneedling With PRP: The All-Natural, Surgery-Free Way to Take Years Off Your Face

Aug 18, 2021
Fighting the signs of aging doesn’t have to mean going under the knife. You can can excellent results with microneedling and PRP, minimally invasive treatments that requires little downtime.
CONTINUE READING

Jul 20, 2021
Wrinkled, sagging skin sends a message of tiredness and aging. Boosting your look with our skin-tightening treatments is a great way to build back your self-esteem and look as good as you feel.
CONTINUE READING

Jun 30, 2021
That sleek silhouette is just the start of the amazing benefits of body contouring. This popular new wellness option is getting more and more attention as it gives many of us the body we want.
CONTINUE READING

Boost Your Confidence With BOTOX®

May 01, 2021
Botox remains one of the most popular cosmetic injections because it works. Not only does Botox reduce unwanted dynamic wrinkles, but it also restores your confidence. Read on to learn more about Botox and what it can do for you.
CONTINUE READING

Nov 04, 2020
Yesterday I spectated the ING NYC Marathon in a serious way for the first time. It was a whole adventure that led me to many stories of inspiration.
CONTINUE READING

All About Aging: What You Should Know

Nov 01, 2020
It’s no big secret that you’re getting older. It happens to everyone!
CONTINUE READING

Add A Lot Of Nutritional Bang With My 6 Favorite Mix-ins!

Oct 27, 2020
While most of the country is counting calories, I try to encourage my clients to look at the quality of what they are eating first. The reason is simple, and logical, yet we still feel the need to eat less and less to lose weight.
CONTINUE READING

Why Do I Get So Hungry Before And During My Period?

Oct 12, 2020
Cravings, bloating and then the hunger – the best diets are often laid asunder by your period. For many women, the symptoms leading up to and during the week of your period are outrageous, and one of these is the hunger...
CONTINUE READING

Why Are Soups So Nutritious?

Oct 01, 2020
When I started doing long distance endurance hiking, I had to come up with food that was efficient to carry. So it needed to be high in nutrition, and low in weight, yet able to satisfy my 6’2″ husband and week long trips of 100 miles...
CONTINUE READING

Its Easier To Maintain Fitness Than To Rebuild It.

Sep 26, 2020
How many times have we looked at celebrities well into their 50’s and 60’s and “wow’d” at how healthy and youthful they look. I’m not talking about having a face that looks 22, I’m talking about a lean, trim physique and a glow to the face...
CONTINUE READING

On The Edge Of Creation – Leaning Beyond Your Fear

Aug 07, 2020
So I just got back after a whirlwind 2 day working trip to Los Angeles where I was asked to give my testimonial for a new anti-aging product. While I have been asked many times over the last 14 years to endorse technologies and cosmetic products...
CONTINUE READING

4 Reasons Why Hiking Is Great For Stress Relief

Jul 21, 2020
HIKING FOR STRESS REDUCTION I am fresh back from hiking 115 miles of the Appalachian Trail in Pennsylvania.
CONTINUE READING

Feb 01, 2020
We have all been told at some point that proper hydration requires us to consume eight glasses of water a day. That works out to about two liters, which is an awful lot of fluid, considering the average human stomach (when unexpanded) is about the size...
CONTINUE READING